Sl*tty Vegan is a black-owned, women-led vegan restaurant located in Atlanta, GA. We serve bangin’ plant-based vegan food, including plant-based burgers made from Impossible patties, plant-based chicken, and even plant-based New Orleans-style shrimp. Our Sl*tty Slushies are tasty alcoholic slushies that make for a refreshing treat. The Sl*tty Vegan food truck is available to book for vegan catering at any event. Visit Sl*tty Vegan today and experience one of the must-eat restaurants in Atlanta. 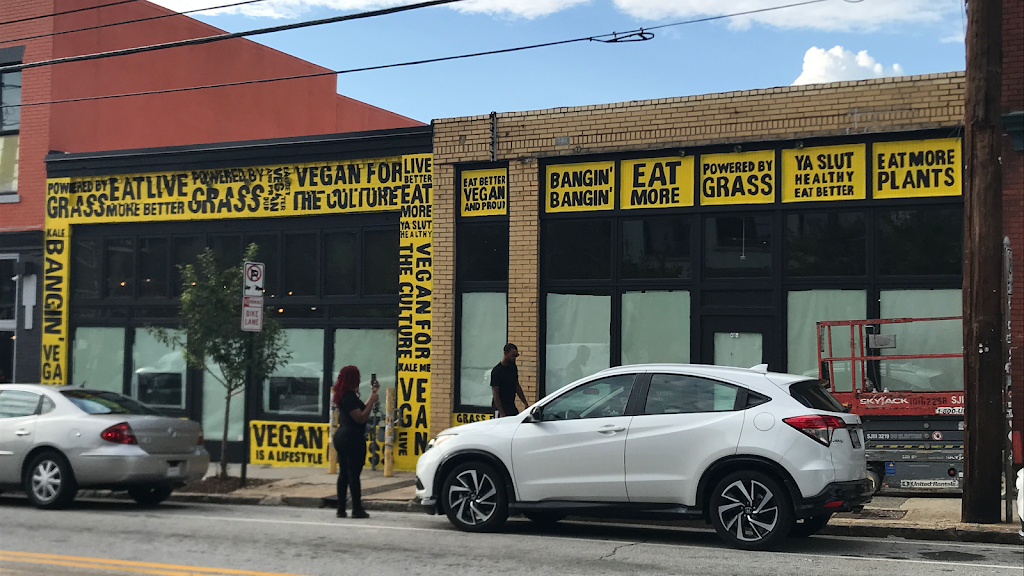 Angelyn Pham
The burger did not disappoint – it tastes like how I remember a meat-based burger to taste. The texture of the vegan patty and vegan cheese along with the taste of the sauce were chef’s kiss. I had to wait outside of the restaurant for a few minutes (came around 12:30 PM on a Saturday), but the line moved quickly. The atmosphere of the store was welcoming and lively, and my burger came out in less than 5 minutes. Whether or not you’re vegan, I think this place is worth visiting and supporting – the total of my order was about $16 so I could see the appeal if you are craving a good vegan burger.
… more
DaFran M. Ware
I had never heard of SluttyVegan before my cousins took me there while visiting Atlanta. So I had no idea what to expect but I was eager to try.
… more
Anointed Soul
First time there this was dope! Atmosphere was cool employees were energetic. The small sweet potato pies were awesome. Didn’t have to wait walk right in the door and made order. I will definitely return to try something different.
… more
Milky Moo
I’ve been trying to go here for forever! We traveled from Columbus to eat here and we were definitely not disappointed. This place was great! Great vibes, great food, and great atmosphere! ❤️ Can’t wait for you guys to come to Columbus one day!
… more
Jasmine .H
Vibe inside was great, everyone spoke and made u feel welcomed. If u are vegan or just want to try it out, the burger did tastes like the real thing. I got the sloppy toppy, it was smothered in their specialty sauce and made the bread a bit soggy. Fries were seasoned good, sweet potato pie was delicious. My boyfriend got the heaux boy but I think they forgot to assemble it as A sandwich. We were caught off guard by it, the vegan shrimp tasted okay. Felt like it should be fried hard because the batter was soft and off putting and the inside of the vegan shrimp was also soft. The strawberry lemonade was so freaking good and refreshing. Overall I think it’s just okay food and if u are vegan you’ll probably come all the time. It’s very pricey tho.
… more
Rasha Ahmed
Let me start by saying that the employees are all amazing and their energy is unmatched. The restaurant itself has really fun vibes even though it’s takeout only.
… more
Symone
More like 3.5 stars but there’s no in between and it wasn’t worth 4 imo.
… more
Robert Stearns
Best vegan bacon and shrimp I’ve ever had. I didn’t even know vegan shrimp existed. The texture was perfect. The burger was beyond amazing. It was so good I didn’t even have time to take a picture I just kept stuffing this heavenly burger into my face. The fries were strongly seasoned- in a very good way.
… more
Rebecca Kenefick
Love this place! All the names are hilarious, have fun saying them to order. Food is super good, honestly probably the best vegan food I’ve ever had. Bought a sweatshirt, it’s good quality and I love it
… more
GG
I couldn’t believe that the burger was vegan. It was so delicious I could eat it everyday. The fries were perfectly seasoned and the lemonade was perfect. It was a perfect date night with hubby. Eating vegan can tasty and delicious
… more
… View more